We descend from the rolling waves, deeper and deeper, until greeted by the ocean floor 30 meters below. Immediately, a large and curious remora approaches. He swims silent circles around us and seems to want something, possibly a soul to cling to, or some dropped leftovers to feed on. Feeling his wake as he passed, and captivated by his closeness,  it’s easy to forget what I came for. I quickly switch on and aim the camera, the shutter snaps his kind greeting and through it, his smile is long and inconspicuous.

We forge ahead to the wall of reef and come face to face with two shape shifting cuttlefish. Smoothed and formed, they hover in place, while shifting in color and pattern as if illuminated from within. I advance closer and with urgent dark-lashed eyes, they jet every which way, perplexingly enfolding space as they move, lending me a faithful portrait in the process.

The scene abound is littered with vase-shaped sponges, like nonentities of nature dilating at the bottom of the sea. So strange, they’re not a rock but an animal, lacking tissues, organs and symmetry. I see the shapes of their bodies and notice how well adapted they are, with the sea flowing through their skins with maximal efficiency. The sponge knows this, but doesn’t know that it knows, with mind and environment as one.

While drifting over a coral formation I notice the elongated body of trumpetfish, lying motionless, as though he were a floating stick, swaying back and forth with the wave action of the water. Seemingly benign and camouflaged, he patiently waits for the lucky chance to suck a wrass into his small flute-shaped mouth.

We begin our ascent from beneath the world of land and sky, the world that I can visit but cannot stay. That is what I came for, to feel a part a world of wonderful creatures, strange colors, shapes and features that lie beneath the foam and waves of the sea. But I’m only a guest left with photos to remember and anticipation for the day when I may return… 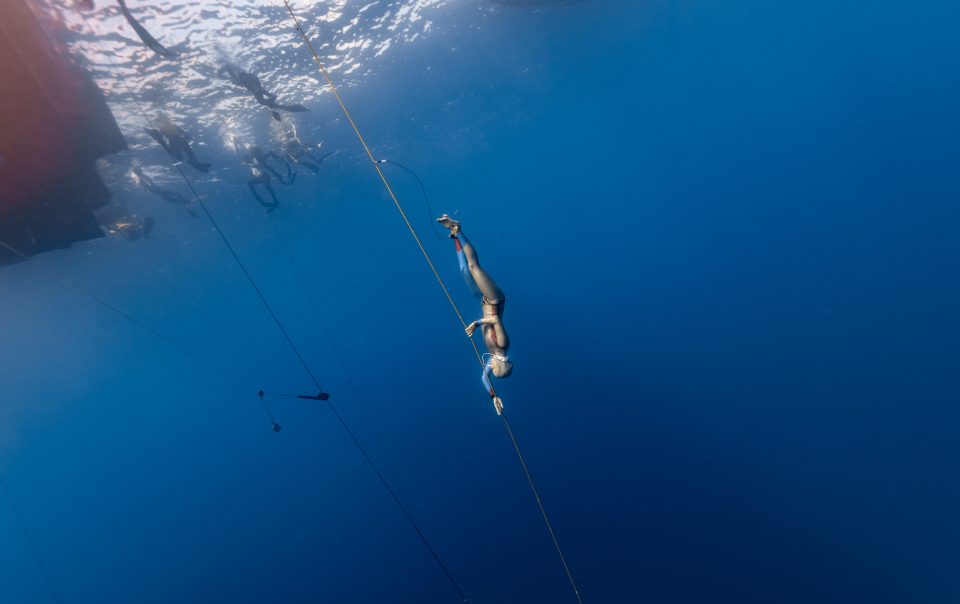 Freediving, An Adventure Worth Living – A Poem

Free from Time – A Poem

A Lionfish Makes Love to the Camera
Previous Article