Dynamic Apnea Training: In the Trenches

Just because the whiteboard was 75% empty does not imply that this dynamic apnea training wasn’t 100% full-on!

Thursday night I was a bit under the weather, but I certainly was not going to miss my last night training with the Saint Raphael Apnee Club 🙂

We began the dynamic apnea training session with a taxing 300 meter dynamic, permitted to take only a single breath as infrequent as possible (roughly every 20-35 meters), while tied to a buddy. I was paired-up with the lovely mermaid, Gaelle, as we were the only two with monofins 🙂 My right arm was strapped to her left arm, and at the sound of Jean-Baptist’s whistle down we went.

What made the dynamic challenging, was the fact that we obviously weren’t very hydrodynamic, with our arms connected together in the middle. It also took us a while to find a rhythm that worked, as Gaelle was used to finning a quicker pace than I, so she was a ahead in the first length, but by mid-second length we got in sync, and were swimming side-by-side like true mermaid bffs.

Being side-by-side and doing dynamic so close together, proved difficult also because our monofins would often bang into one-another and into each-other. I think Gaelle got struck somewhere on her leg from the sharp blade of my monofin, heck you know it’s insane when you get mermaid battle wounds!

My goal for the warm-up was to bare as many contractions as I could before taking a breath, I certainly accomplished that with flying colors.

Next up was 6 x 50 meter dynamic sprints also while tied to a buddy. (We ended up doing four lengths instead of six, probably because Jean-Baptist wanted to move onto more hellish exercises…) Gaelle and I held hands this time instead of being bound together on the arms, which worked out better, as it allowed more space for our monofins to do their ‘mermaid thang’.

The dynamic sprints made for quite a CO2 workout, by the end of the round, I was so scorching hot that I remember thinking ‘I wish someone would pour a bucket of ice-water on me right now and that some of it would end up in my mouth’

Next up, was superman dynamic apneas. This does not mean, pretend you are superman / superwoman flying underwater. Okay, who am I kidding, maybe it does mean that.

Basically with a buddy, one person is in front and the other person is behind them holding the ankles of the person in front. The person behind propels both people forward by finning, as strongly and quickly as they can. Meanwhile the person in the front glides like superman / superwoman, while holding their breath.

That was fun, being in the front anyway 🙂 For the person behind it’s hard work but Gaelle and I did an awesome job, doing 50 meters with one minute rests and loads of hi-fives in-between.

Throughout the training session, I liked pretending that I’d get paid $5,000 for each 50 meter length, then I thought about what bills I would pay off as I finished them. Hey, it worked for me. Let’s just say I’ve paid most of my college off.

Most training sessions would have been finished by now but not us! With 15 minutes to go, Jean-Baptist made the most of it.

So to top it off, we did dynamics as a group, swimming width-wise of the pool (20 meter lengths). Several different exercises, all without fins but wearing wetsuit and weight belts. Thank the lord we got to use weight belts!

Since I’m quite used to DNF and being that it was only 20 meters, with weight belt, you would think it would’ve been easy, but it wasn’t. These exercises weren’t just any old dynamic-no-fins exercises…

The first and second lengths were swimming feet first, face-up or face-down. I soon realized that face-down was definitely the way to go but still had trouble floating to the surface butt-first argh.

The third length was swimming DNF, sprinting and using only the arms.

The fourth length was swimming DNF but facing-upward, not downward, that I have to admit was pretty fun.

And lastly, we were to attempt a regular 40 meter DNF (with arms and legs).

All of these were done with less than two minutes between. It was tough but I kept up and finished strong and satisfied.

After the training finished I laid at the edge of the pool for several minutes, huffing and puffing, exhausted. Then, I schlepped myself like drowsy bear to the showers (for the record I sat here for certainly way too long trying to think of a better animal to compare myself to and only came up with a slug, a turtle, a sloth and others you probably don’t even want to know.)

Note that even after changing out of my wetsuit and showering sweat was still rolling down my face like I just ran a marathon.

– Many dynamic apnea exercises I’ve never done, which was great. You know me, I always like to discover and try new exercises. It keeps things interesting.

– Jean-Baptist has been a fantastic trainer and motivator so, of course, a massive thanks goes to him

– Also a massive thanks to Nicolas, who was unstoppable in getting me in the club, who kicked my butt to go to training, and who drove me to and from to pool. It wouldn’t have been possible were it not for him being a such an incredible stand for me 😀

After the training we gathered all together in the lobbyto eat chocolate chip cookies and say our goodbyes, I was off to Egypt the next morning.

I don’t know when I will be back in Saint Raphael, but I will certainly miss training with the Saint Raphael Apnee Club. It was an incredible experience being in the trenches with so many amazing and kind people. Every training, while right alongside one-another, we pushed ourselves as hard as we could, fighting and/or coming to terms with the mental thoughts and physical urges. All of this, only to challenge ourselves, to get closer to our limits, and all of this together.

Out of this shared combat-like-experience emerged a team bond, which defied language barriers. I’ll miss being in those trenches with my new-found French freediving comrads :'(

Thank you for sharing your training. I love reading your blog and draw inspiration from it.

Thank you for reading! 😀

Yes, of course! Will write as often as I can 🙂 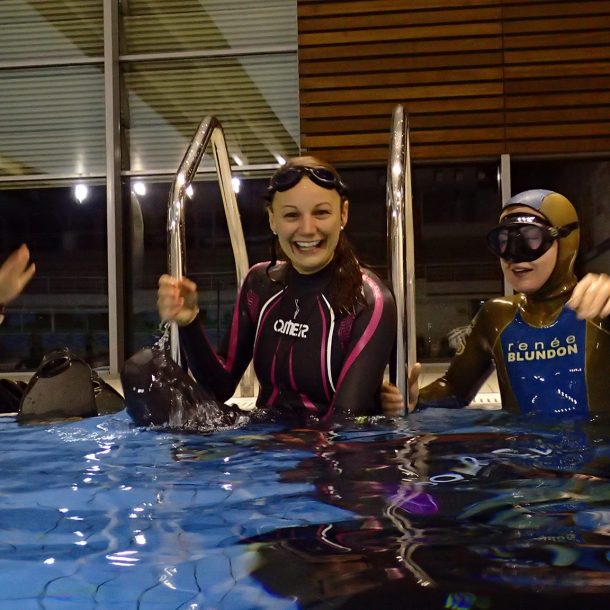 Freediving & Self Cultivation
Next Article
Stay in the know